Ethanol Fireplace and Television, a Modern Approach and Design Both ethanol fireplace and television are major elements of the decoration of your living spaces. The arrival of the  of the ethanol fireplace and television (16/9 flat screen) has revolutionized the development of the living room and, more generally, of the rooms to be “lived in ” in your house, your apartment, or commercial spaces. With the advent of new technologies, televisions and modern fireplaces have taken a different position. Even if they remain the major and essential elements of a room, they are more discreet, more modular, and more functional. Both the television and the fireplace are no longer huge devices that occupy the entire space, but rather design objects that combine simple installation and use. These devices are truly integrated to your style and your interior atmosphere in a harmonious and deliberate manner.

Faced with globalization, the personalization of one’s living space is becoming a necessity. In fact, we are seeing two convergent phenomenon. The desire to personalize one’s living space, and the arrival of fashion in the world, of interior decoration. Professionals, indoor architects, decorators, and designers are using these trends and imagine new spaces for you. In it, they include of course flat screens and built-in electronic ethanol burners in order to create your atmosphere, your “custom” interior. What was once impossible is now allowed in design and decoration with maximum creative freedom to better “stick” to your desires.

Long work is a genuine concern in the design of your house, your loft, or your apartment. Modern devices are the result of this trend to simplify and speed up the implementation. For modern hearths, the trend is to do without a fume discharge vent. The vent free fireplace avoids this tedious work and allows urban dwellers to enjoy the pleasures fire in all types of homes.
On the other hand, the size of the devices has been drastically reduced. It is now possible to install a fireplace hearth and a television in the same space, without it being completely taken over. It is even possible to install a screen above a fire point. Of course, the styles and uses depend entirely on the particular needs of the inhabitants. An ethanol hearth and a flat screen television can be installed freely, as desired. 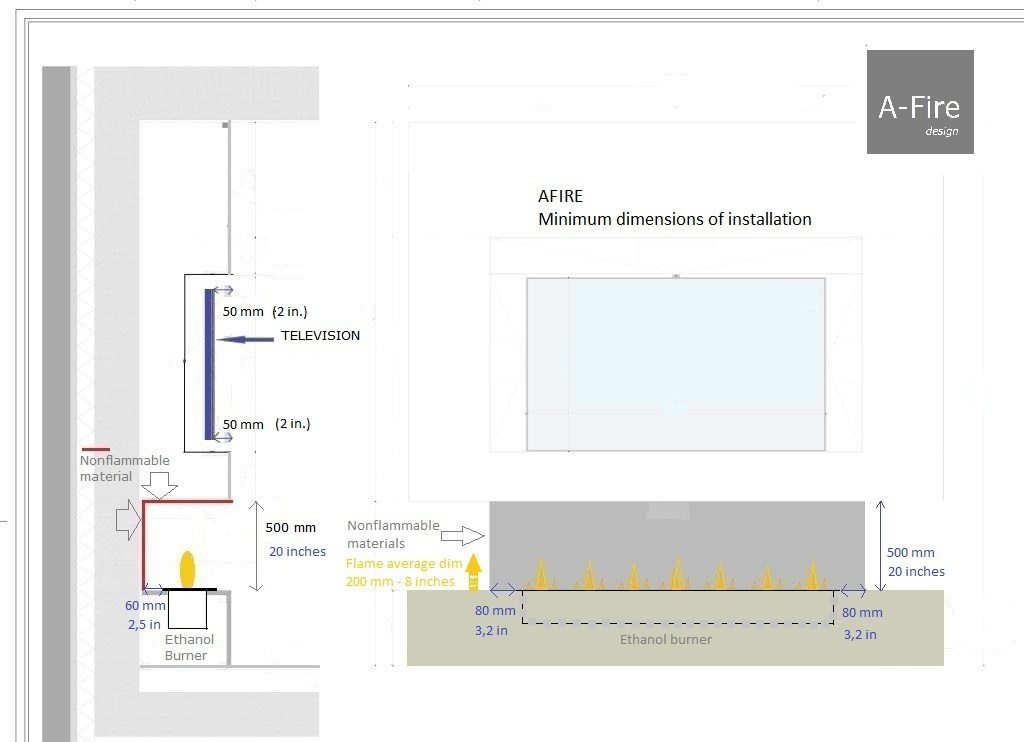 The Pleasure of fire and Television : Simply Press the Remote Control

Nothing is worse than constraints and chores. The modern world fills us with all kinds of obligations that are not only wastes of time, but also daily obstacles. However, when we “go home” the simplification and speed of use of domestic appliances are “pluses” that very often become indispensible. We remember the VCR, impossible to program, impossible to use… The VCR has disappeared….
Controlling a bio ethanol fireplace and television has become simple. In general, it consists in pressing a button. It may be a button on the device, but more generally it is on a remote control or a remote system. New mobile telephony applications can even group, through home automation system, a set of devices which include bio ethanol fireplace and television. Enjoying the pleasure of fire every day, without constraints and in all safety, that is the concept of the design bio fireplace created by a remote controlled AFIRE bioethanol burner.
Complete information will be sent to you along with the catalog and the technical data. If you would like the price for a model (including the shipping costs), please do not hesitate to ask us by e-mail.

Because Your Fireplace is Unique!

AFIRE delivers anywhere in the world within 10 days with DHL

AFIRE delivers anywhere in the world within 10 days with DHL